A museum about people

The Tropenmuseum is housed in one of the most beautiful, original museum buildings in the Netherlands. Every one of the objects tells a human story and makes you curious about the vast cultural diversity that enriches the world. They tell us about universal themes like mourning, celebrating, decorating, praying or fighting. From Africa to West and Southeast Asia, from New Guinea to Latin America, in the Tropenmuseum you discover that besides the differences, we are all the same: human.

The history of the Tropenmuseum dates back to 1864. In this year the Society for the Promotion of Industry (Maatschappij ter Bevordering van Nijverheid) decided that a collection should be started for a museum about the Dutch overseas territories. Frederik van Eeden was commissioned to do this. A collection, part of which is still in the museum’s stockrooms, was started in the attic of his home in Haarlem.

From Colonial to Tropical

It is possibly the most beautiful building in East Amsterdam: the Tropenmuseum. Imposing, and since a few recent changes to the front of the building, easily seen from the nearby road, Linnaeusstraat. The museum opened in 1926 as part of the larger Colonial Institute. Various sponsors, including the Ministry of Colonies, commissioned this institute to be built.

There were three departments: The Trade Museum, Tropical Hygiene and Anthropology, each with its own collection and exhibition space in the museum. The articles of association of the Colonial Institute give two main reasons for the existence of the museum: collecting and disseminating knowledge about the overseas territories (colonial propaganda) and promoting all the interests stemming from the colonial possessions, for both the Netherlands and the colonies (van Duuren, 1990:25)

In 1926 the institute was the largest building in Amsterdam. After the founding of the Colonial Institute in 1910, it took more than 16 years’ work before the institute opened. The location was the Oosterbegraafplaats, a cemetery, which was then moved outside the city boundaries. But where did the collection actually come from?

More than 70 years earlier a botanist from Haarlem had a brilliant idea: why not bring collections of all kinds of materials from the colonies together in a museum?

This Frederik Willem van Eeden, father of the famous writer, managed to persuade the Board of Directors of his employer, the Society for the Promotion of Industry, of the importance of a ‘museum of raw materials, natural products and craftsmanship from the Dutch Overseas possessions and colonies’. In 1864 he was given the commission to build up a collection. He initially did this in his own enormous attic. 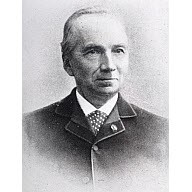 Fortunately it was realized that this initiative was extremely important and needed more space. Thorbecke, the Minister of the Interior at the time, provided the collection with free accommodation in a large villa in Haarlem, Paviljoen Welgelegen. And in 1871 the Colonial Museum opened its doors. The collection comprised various colonial products and information about their uses. An anthropological description of lifestyles and cultures was scarcely to be found. Director van Eeden was mainly interested in the utilization of local materials from the colonies. He felt that the creative achievements there could be a source of inspiration for crafts and trades in Europe. Nevertheless, the materials remained more important to him and the Colonial Museum continued to be mainly a product museum. 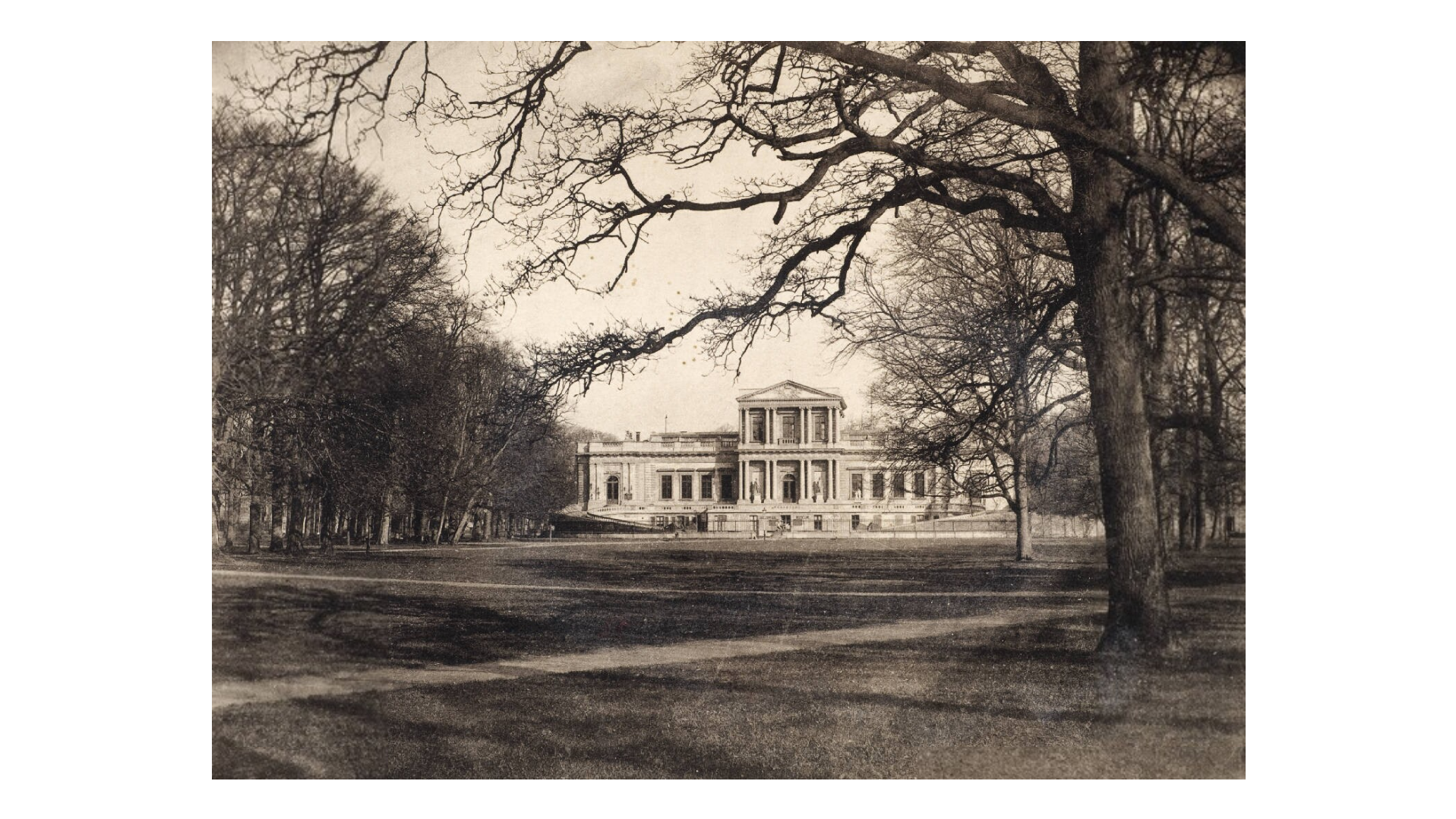 About forty years after the founding of the museum in Haarlem, the cramped accommodation and less than ideal location prompted discussions on opening a new Colonial Museum in Amsterdam.

Around the same time the Artis zoo wanted to find a new home for its ethnographical collection. From 1858 Artis had its own ethnographical museum of important objects from Indonesia, Africa and New Guinea. In 1883 the museum was given a large part of the collection exhibited at the huge Colonial World exhibition in Amsterdam. When eminent Amsterdammers founded the Colonial Museum in 1910, Artis decided to give the anthropological collection to the new museum, owing to their ideas about what belonged in a zoo.

These two collections formed the basis of today’s Tropenmuseum. The objects can be identified by an H or an A in the inventory number. Other large collections were quickly added, mainly by donations, exchanges and purchases.

Over the years various exhibitions were organized in the new Colonial Museum, which in fact comprised three departments: the Trade Museum (the Haarlem collection), Tropical Hygiene and Anthropology (the Artis collection). The galleries were used for permanent exhibitions while the impressive light court, today’s Great Hall, was used for temporary presentations. Understandably, particular attention was paid to Indonesia.

The museum in war time

During World War II the Colonial Institute was the headquarters of the German Grüne Polizei. Owing to the enormity of the building, the extraordinary situation arose that the resistance also operated from the institute. A radio was hidden in one of the temple moulds in the Temple Room of the museum. After the war the Colonial Institute changed its name to the Indies Institute. When Indonesia became independent on 17 August 1945, the Netherlands did not accept this. The Indies Institute was then involved in preparing soldiers to go and fight against Indonesian independence. There were ‘military actions’, a euphemistic term for the violent actions taken.

Politics was overtaken by reality and shortly afterwards the museum had to change its name again. It became the Tropenmuseum, part of the Royal Tropical Institute. It no longer fell under the Ministry of Colonies but under Foreign Affairs and from then focused on tropical countries. As the collection primarily comprised items from the colonies, it had to be considerably expanded. Part of the existing collection was exchanged with or sold to other museums. Exhibitions about Indonesia were initially a sensitive matter and attention was paid, for example, to Papua, which the Netherlands ruled until 1962.

A new change in direction followed: in the 1970s the museum concentrated on the developing countries and their problems. There were exhibitions with relatively cheaply acquired utensils, sound recordings and reconstructions of ‘village scenes’, which at the time were extremely innovative exhibition forms. It necessitated extensive rebuilding. The stairs at the front of the building were demolished and the entrance was moved down a floor. The tiled floors of the museum galleries were covered with a wooden floor, to muffle the sound, amongst other things. A wing that had been added to the former restaurant made way for the children’s museum Tropenmuseum Junior and the Tropentheater, which both opened in 1975.

From the 1990s the museum rearranged the various departments. It organized high-profile temporary exhibitions using new exhibition techniques. In 2014 the museum merged with the Museum Volkenkunde in Leiden and the Afrika Museum in Berg en Dal to form the National Museum of World Cultures. From then it fell under the Ministry of Education, Culture and Science and the collection formed part of the National collection.

The museum is open from 10 am to 5 pm from Tuesday to Sunday.

During all national school holidays we are also open on Monday. 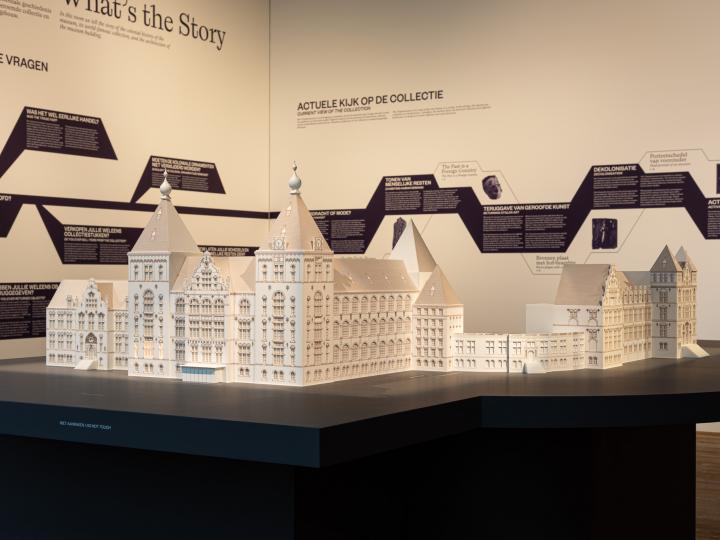 About the colonial history of the museum, the world-famous collection and the architecture of the building.
Link