Help us to restore an endangered Masterpiece: the folding screen by Kawahara Keiga

The restoration of this folding screen is an extremely important and painstaking project. Extensive preliminary research into the screen’s present condition has revealed that the damage is far worse than initially thought. A full and comprehensive restoration of the work is needed without delay. Join us!

> Join our crowdfunding initiative and support the project!

A prime work of art, but not in prime condition

Museum Volkenkunde has acquired a rare and valuable masterpiece: the only known folding screen to have been decorated by the Japanese painter Kawahara Keiga (1786-circa 1860). Because of the extreme levels of detail he incorporated in his painting, Keiga is often called ‘the photographer without a camera’. The screen’s size makes this work particularly unusual, for the depiction of Nagasaki Bay spans eight panels totalling more than four and a half metres in width. The small island of Deshima is depicted in the centre. For centuries Deshima served as a trading post for the Dutch in Japan. They were the only Europeans granted access to Japan. In addition, there was a Chinese trading post, depicted by Keiga on the left of the screen. This masterpiece effectively represents the biggest representation of the international relations Japan conducted via Nagasaki, one of the reasons why the screen has such historical significance.

The work is over 180 years old, and time has left its mark. Normally a Japanese folding screen such as this would have been completely taken apart after a century and subsequently remounted. But with this screen that hasn’t been done. Now each of its constituent parts --  the wooden framework and the eight panels; the various intermediate layers of paper and the silk painting – requires restoration using rare Japanese materials and special techniques. 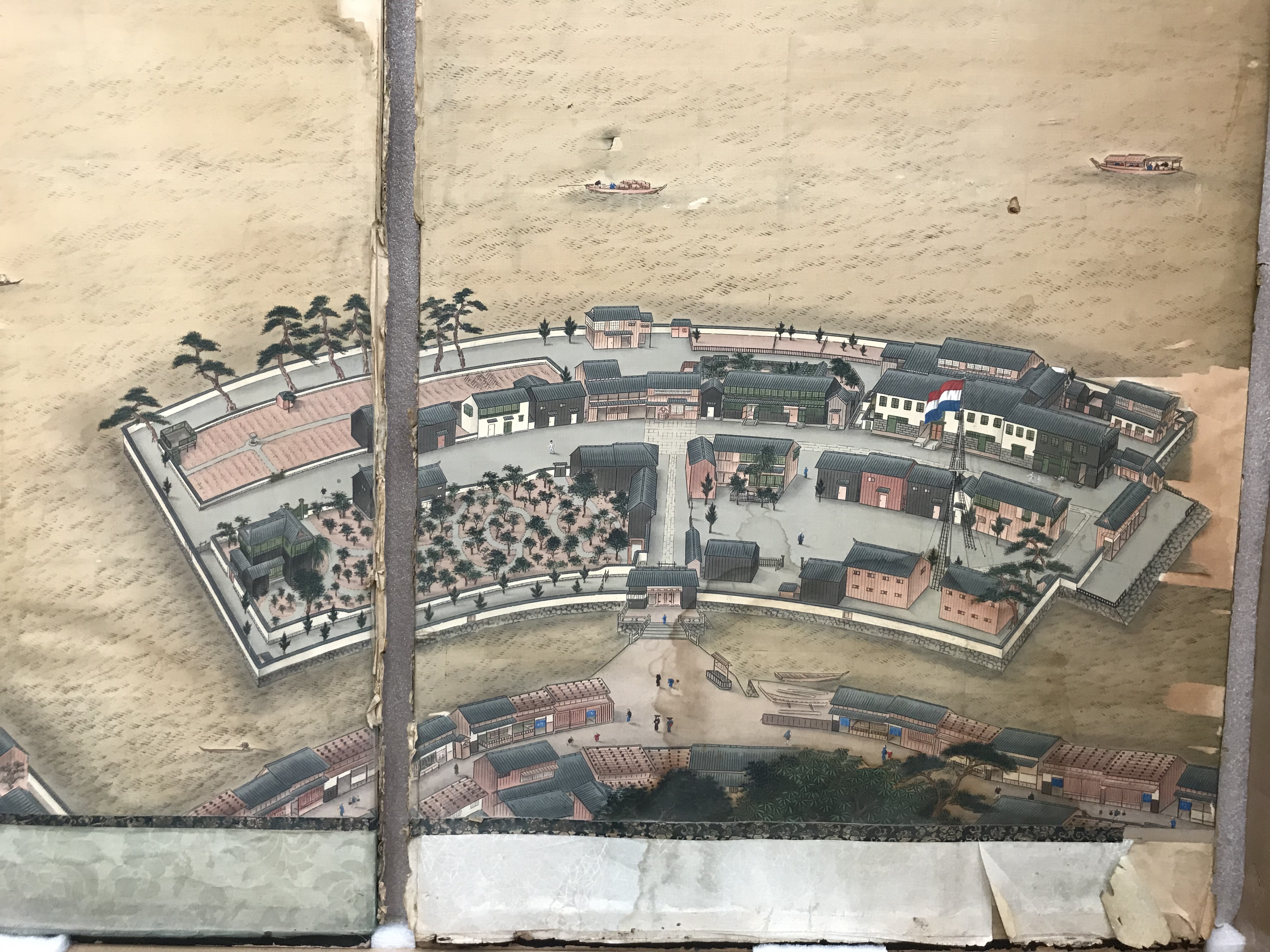 Parties involved in the project

Restorient will undertake restoration of the folding screen. Experts allied to this restoration studio in Leiden are specialised in traditional Japanese materials and techniques. As such they are the best conceivable party to undertake the work, thanks to their years of experience in working with folding screens and more specifically with paintings on silk.

The Keiga folding screen was acquired with financial support from the Vereniging Rembrandt, the Mondrian Fund, VSB Fund, BankGiro Lottery and Friends of the Volkenkunde Museum. Restoration of the screen is also being aided by the TEFAF Museum Restoration Fund. The participation of all these parties serves to underline the historic importance of this work of art. Read all about the folding screen and the restoration process in this blog

> Join our crowdfunding initiative and support the project!